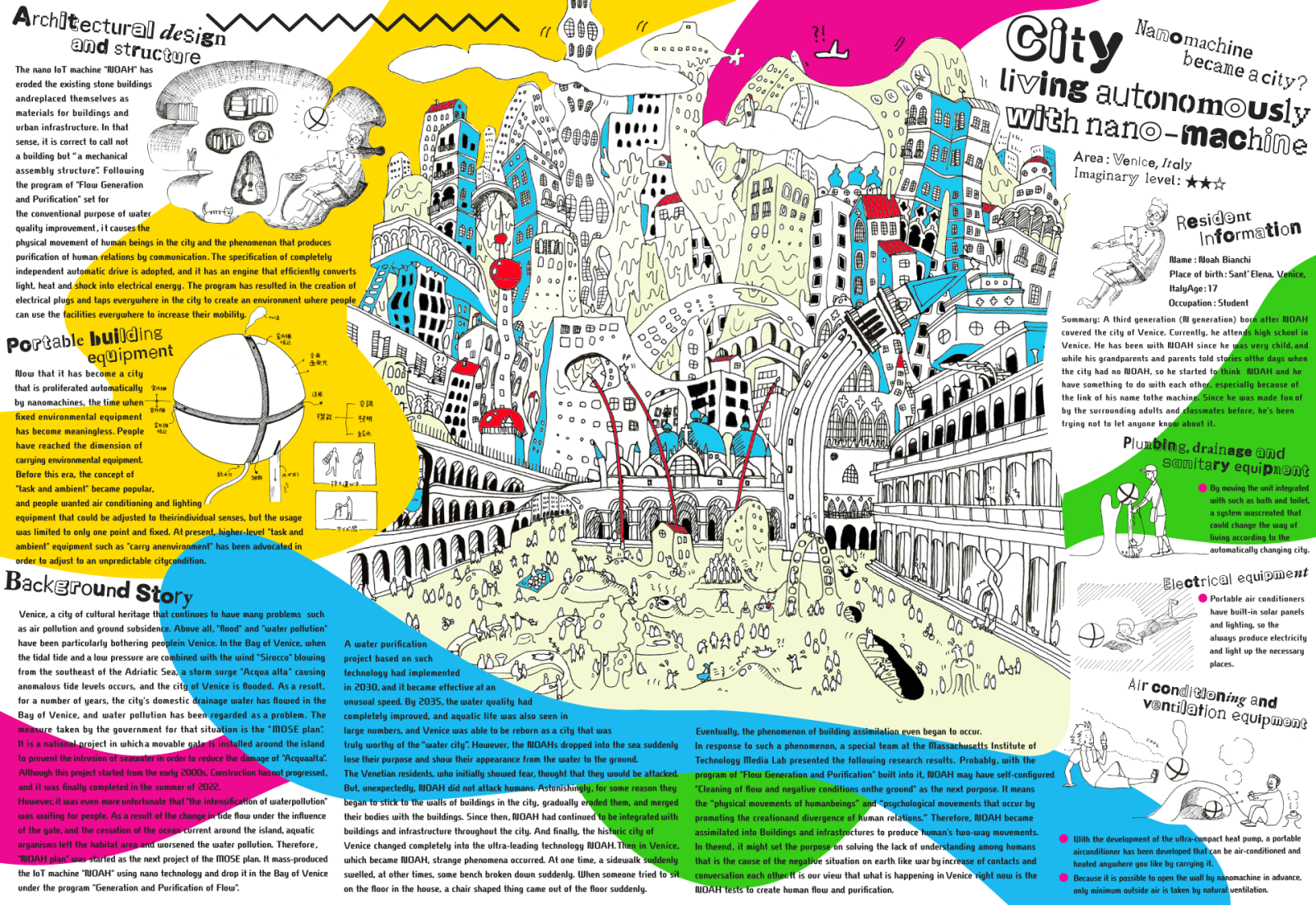 The New World Architecture, an undiscovered future of architecture created by NoMaDoS only through imagination.
This time, no.2 "City living autonomously with nano-machine".

One day, nanomachines that continue to roam the sea of ​​Venice merged with the city. When the program blends into the architecture and the city leads people. Where does life go for?
"Architecture" is not limited to buildings. NoMaDoS members talk about their feelings and commitments in the design of a new-world town. 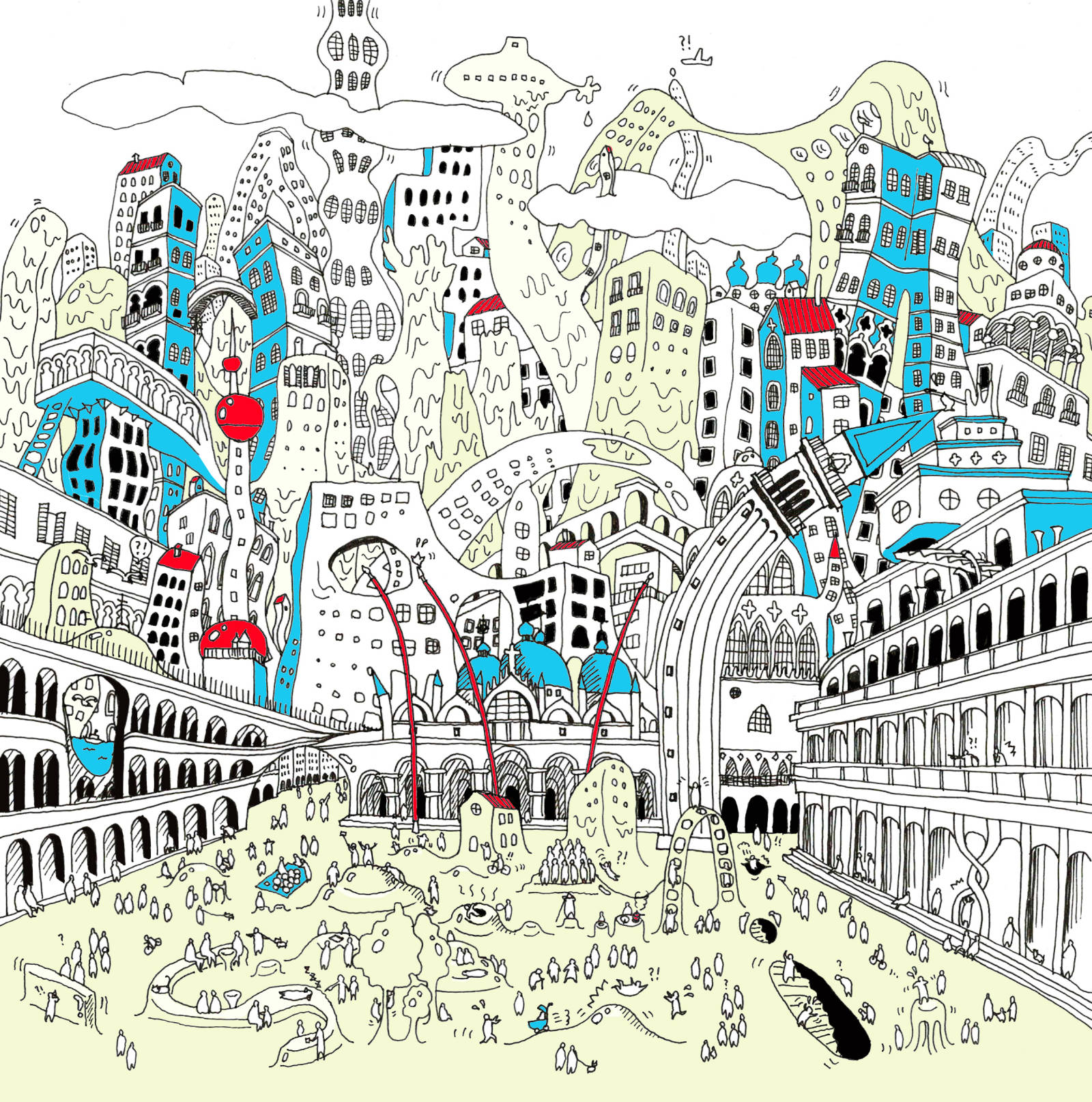 ーWhat kind of idea was this town born from?

[speech position="左" name="Den-Den" content="It started from the point where <buildings
that grow like bacteria look interesting!> However, there was a feeling that
something was not real, and it was nanomachine that comes to my mind. Well, there still seems to be some wondering that nanomachines are real (laughs).
What I thought was the post-humanism point of view, from the time when humans manipulate machines to the time when machines act on human life.
The theme is usually drawn as a dystopia. However, because the members say unanimously <Distopia got bored!>, I feel that I wanted to draw a heartwarming world and architecture"]
[speech position="左" name="Fumi-chan" content="Nanomachines do not have the intention to harm people, but do their best to do well-meaning pranks. It was very fun to draw while imagining a world full of playful pranks, and I moved the pen while laughing alone at midnight. There is a person who is buzzing and blown lightly, there is a person who is made to play a game with a sparrow table and what not. Even more stories are prepared, so I want you to look forward to watching it by all means."]

Think about architecture with "fluid" 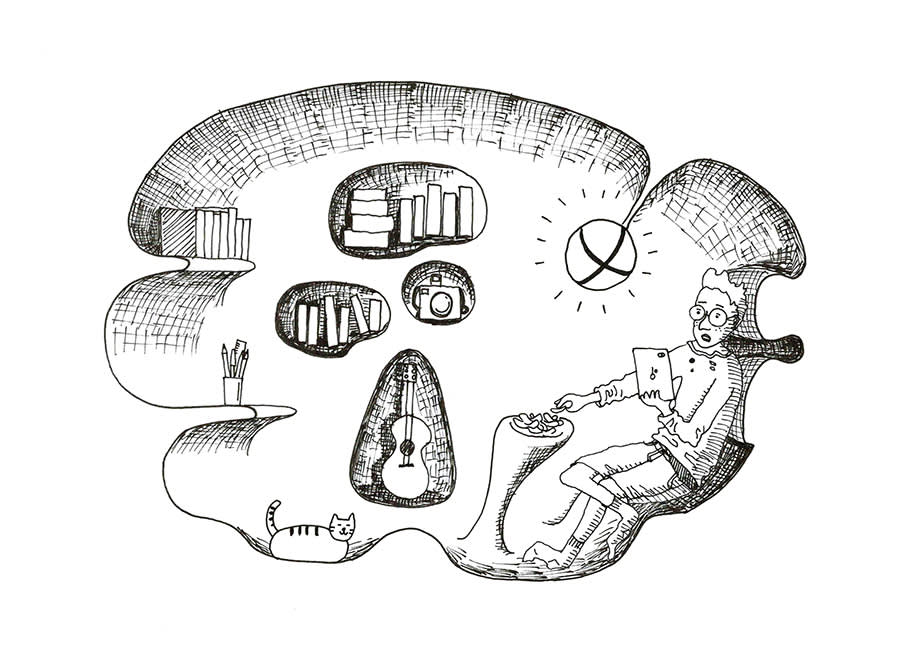 ーWhat kind of image did you create interior？

[speech position="左" name="Fumi-chan" content="If an architecture is formed like a fluid, it is not necessary to put furniture in a room, and I think that the hollow necessary for placing things and the convexity for sitting will appear organically.
This time, I imagined the house of a youth who is lazy in too convenient room."]
[speech position="左" name="Den-Den" content="In fact, there is a back story in this character. There was another girl character until just before the content was completed. Besides, there was a novel that they appeared. However, since it was finally undisclosed, I will try to upload it to Twitter someday."]

Change of the view point to ​​"carrying building equipment" 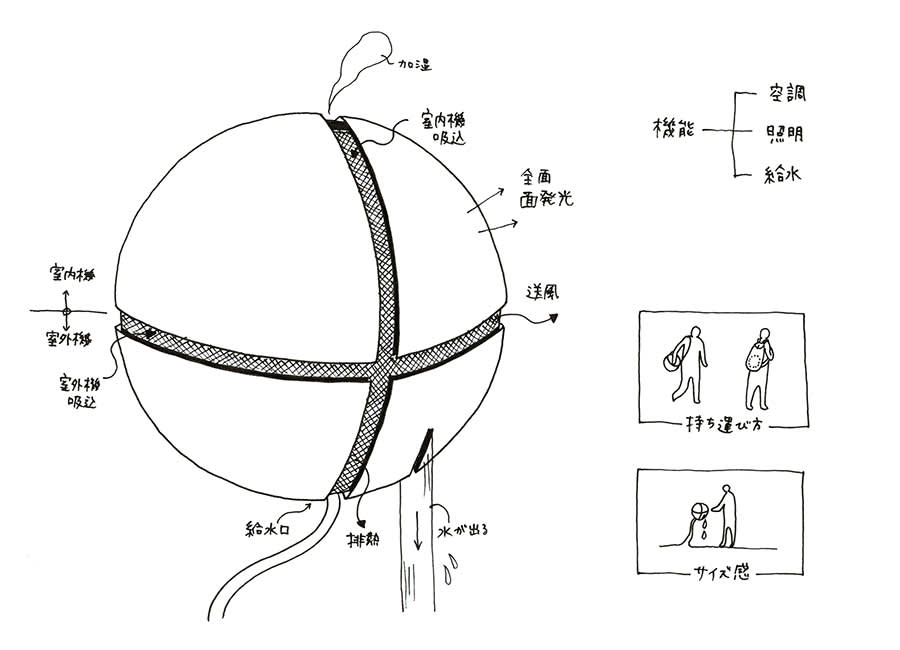 ーWhat kind of idea was this facility born？

[speech position="左" name="Ryo-chan" content="First of all, there is no fixed facility in a city or a building that causes unexpected changes by nanomachines! , I thought intuitively. Then, I changed the view point to carrying the equipment itself and your own comfortable environment.
There is a portable humidifier even today, so in the future could it be like a portable air conditioner?
The point of attention is that all the facilities of air conditioning, sanitation and electricity are integrated in one facility, and the function is divided into up and down like the image of the outdoor unit and the indoor unit."] 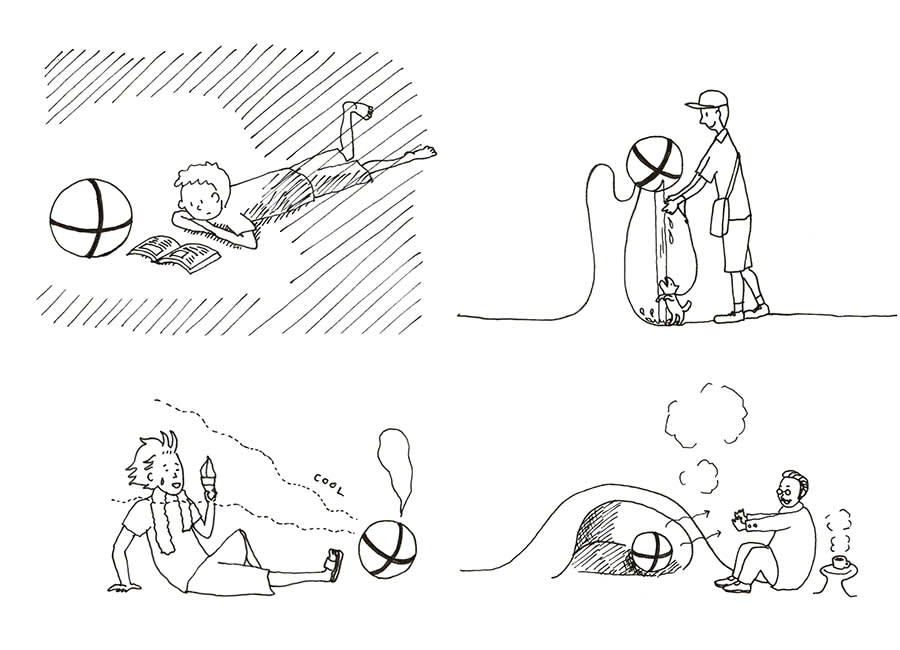 [speech position="左" name="Ryo-chan" content="I think that more images will appear by thinking about various usages. Find a place where you are comfortable by yourself, and think about a lifestyle in which you will fit yourself with the change in the form of the nanomachine city.
Because you are able to carry the environment freely, so you could do anything, but it is particularly interesting that you put as much circumstances as you can come up, to think about them."]
[speech position="左" name="Den-Den" content="This new world architecture is the content of this equipment. I think that some of the facilities can be seen as a sober existence supporting the architecture from behind, but when you look at this you notice that it is not the case at all.
Though the idea of ​​carrying the equipment itself is quite sensational, and at the same time I feel a reality because of the inconvenience of carrying it. It looks like a cell phone 30 years ago lol"] 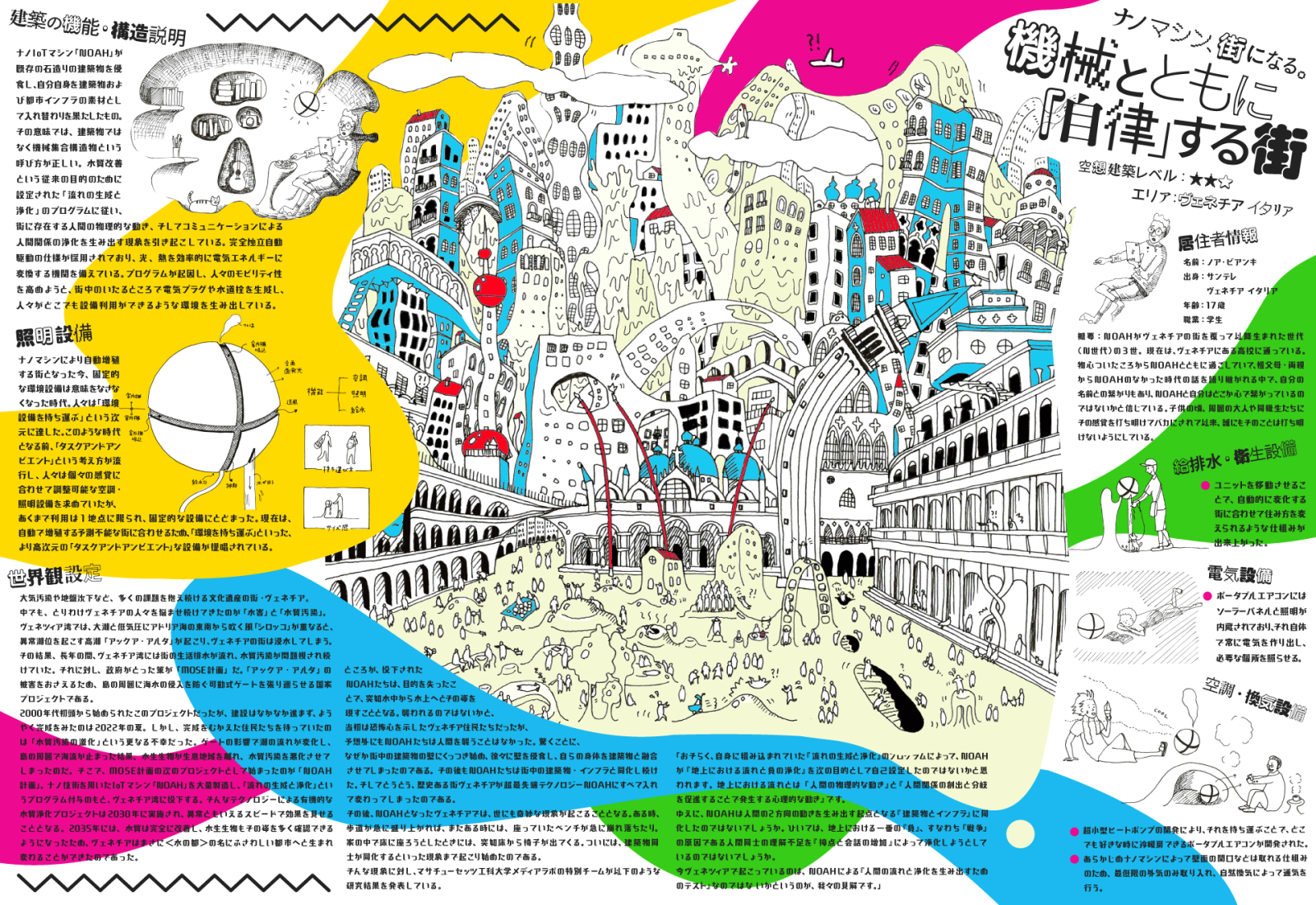 NoMaDoS continues to build a new world. If you look into it, may your world change?

Look at the New World Map