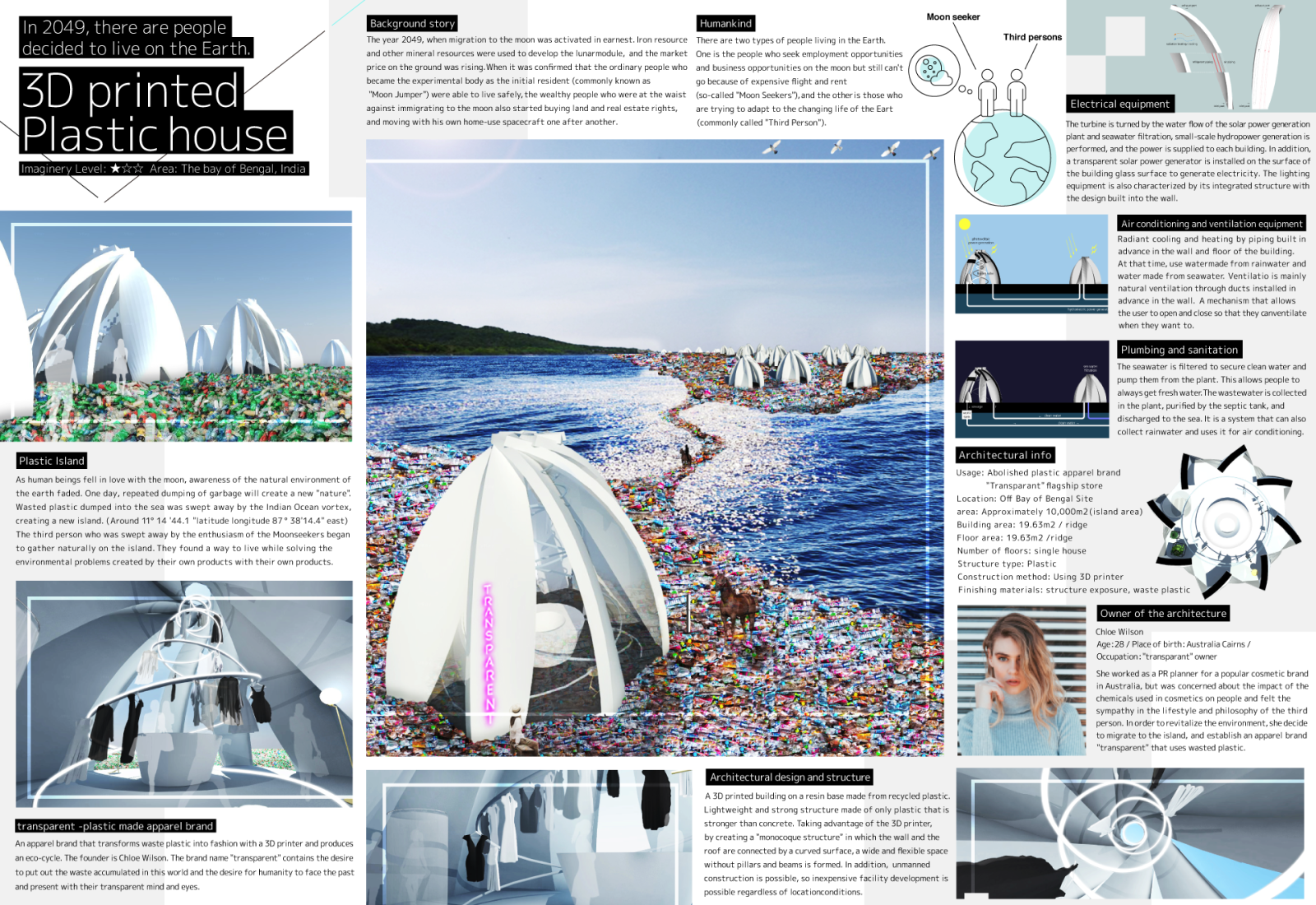 New world architecture is unseen future architecture content made from imagination and desire of NoMaDoS.
This time, the first work to commemorate. "3D printed shop with plastic".

We drew the figure of humanity who decided to live on the earth in the transition period of the world where human beings started to divide into two parts of the moon and the earth, and made the architecture that they live.

The members involved in the production talk
about the thought process and commitment that we put in this construction. 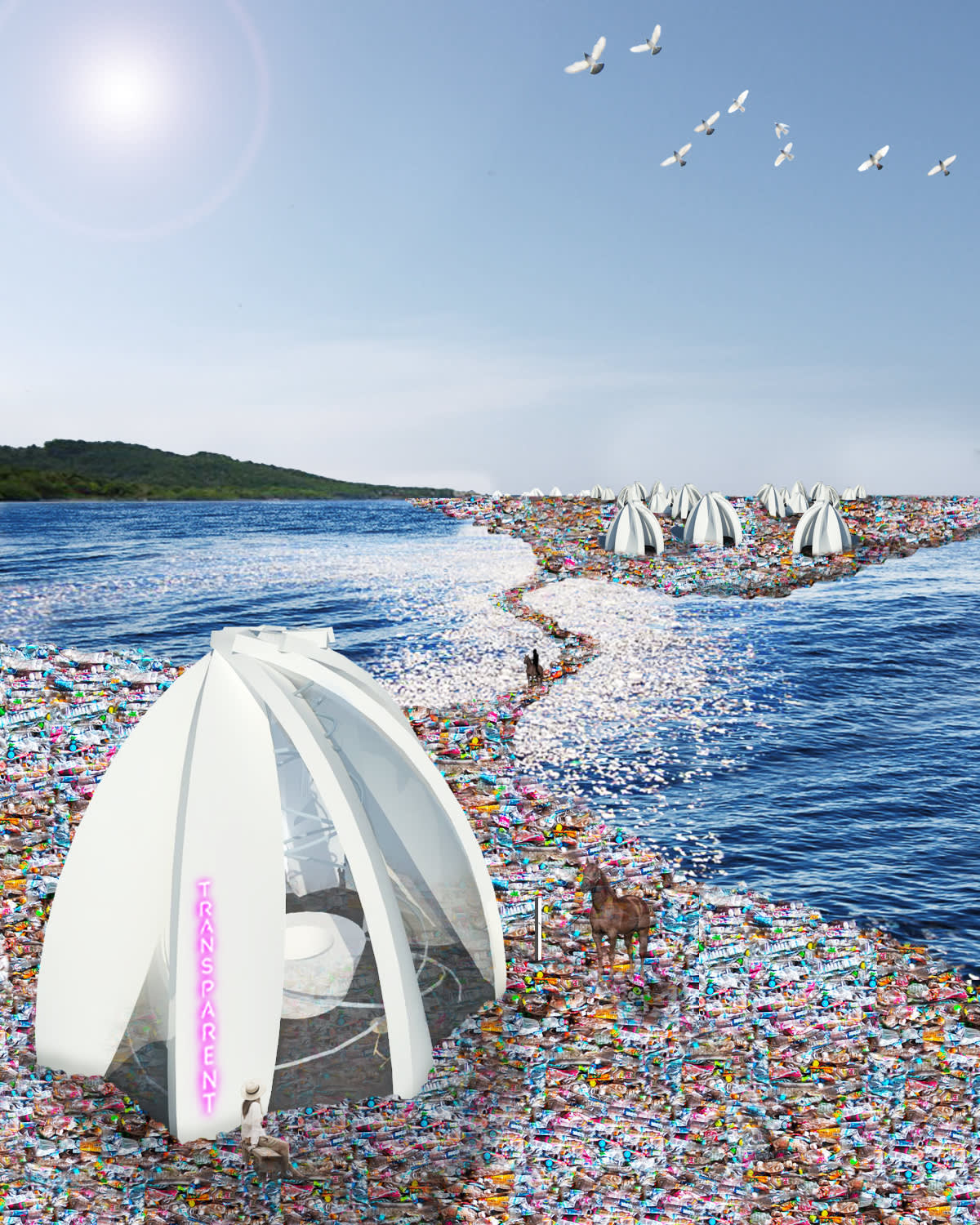 -What concept did this architecture come from?

[speech position="左" name="Fumi-chan" content="With the declining birthrate and aging population, the construction industry is in a serious situation where labor shortages (in particular, lack of artisans) are serious, so I thought that unmanned construction with 3D printing was a realistic theme.
And I started feeling that it is easy for people to get empathy with a guilty-free feeling if you make an architecture using trash that will come on the ocean and gather on the tide."]
[speech position="左" name="Den-Den" content="Outside of Japan, examples of construction using 3D printers are already beginning to appear.
This time, in order to create free ideas apart from the existing examples, we have expanded the image based on the visuals created by Fumi and others, and built the world view."] 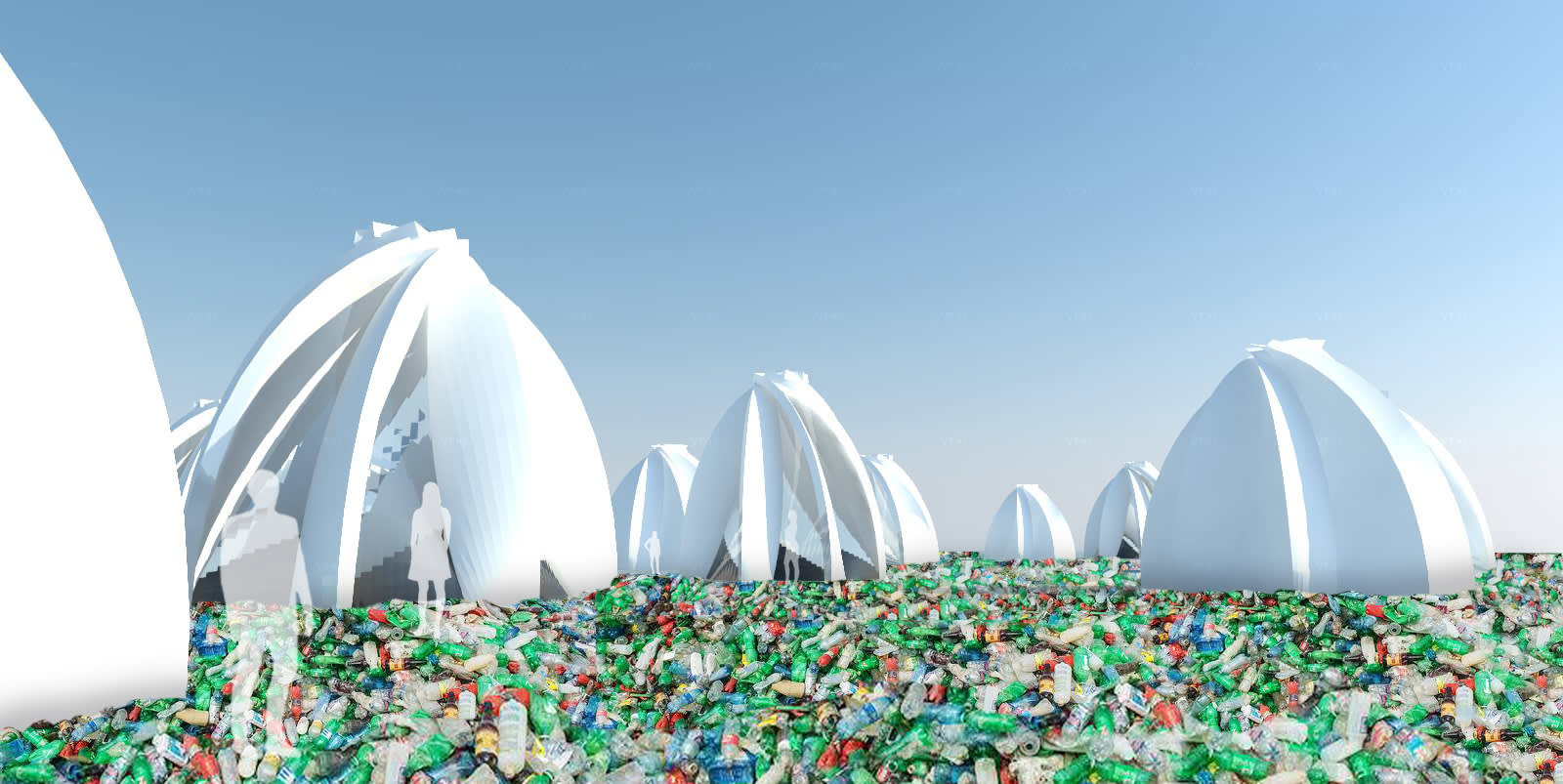 [speech position="左" name="Den-Den" content="When I hear the words <3D printer> and <wasted plastic>, I think that I get some sort of inorganic impression, but the visual that Fumi finished was warm and soft.
Therefore, we focused on the beauty as an architecture with philosophy and thought rather than the functional and business features such as <low price, high speed construction and diverse shapes> that 3D printer architecture has.
So, as for the view of the world, I wanted to put together the setting of nature, society and people related to architecture with an ideological and philosophical theme while having concreteness."]

Architecture as an Apparel Shop 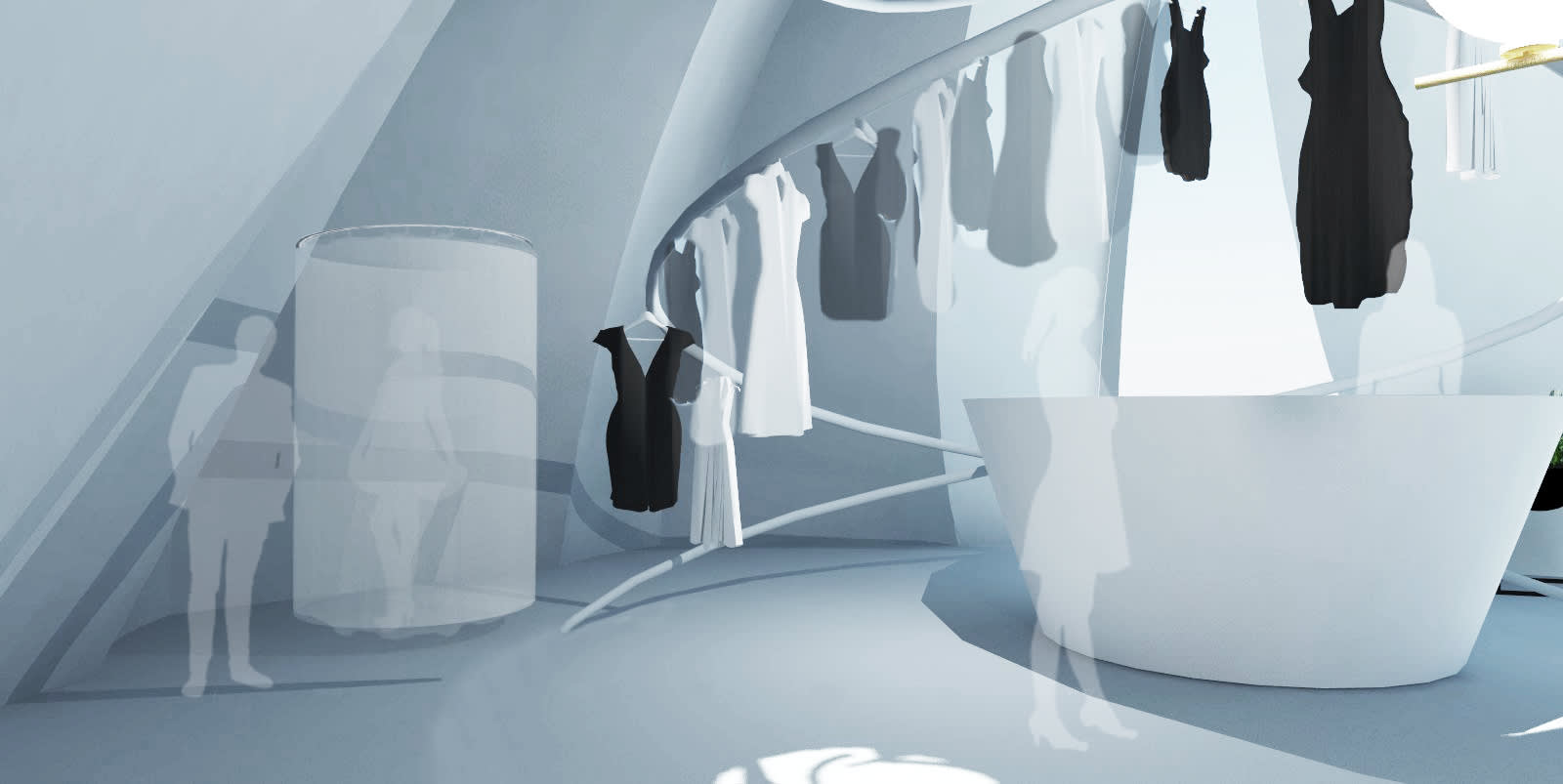 -What is your intention to make an apparel brand?

[speech position="左" name="Den-Den" content="The image of <natural change due to human behavior, a small society quietly resisting it> has come to the foremost when I thought about wasted
plastic. We focused on apparel because of my experience as a student of Fairtrade student groups. I think that the point of "Apparel and social problems" may have an affinity with this image.

When I gave my thoughts to the members, the idea came out that ”If so, then this architecture itself could be the shop for the apparel and the resident should be the owner of the brand?” From there each member was excited and started to pile more stories up."I really want to make clothes of this apparel brand!" Some say that (laughs)."] 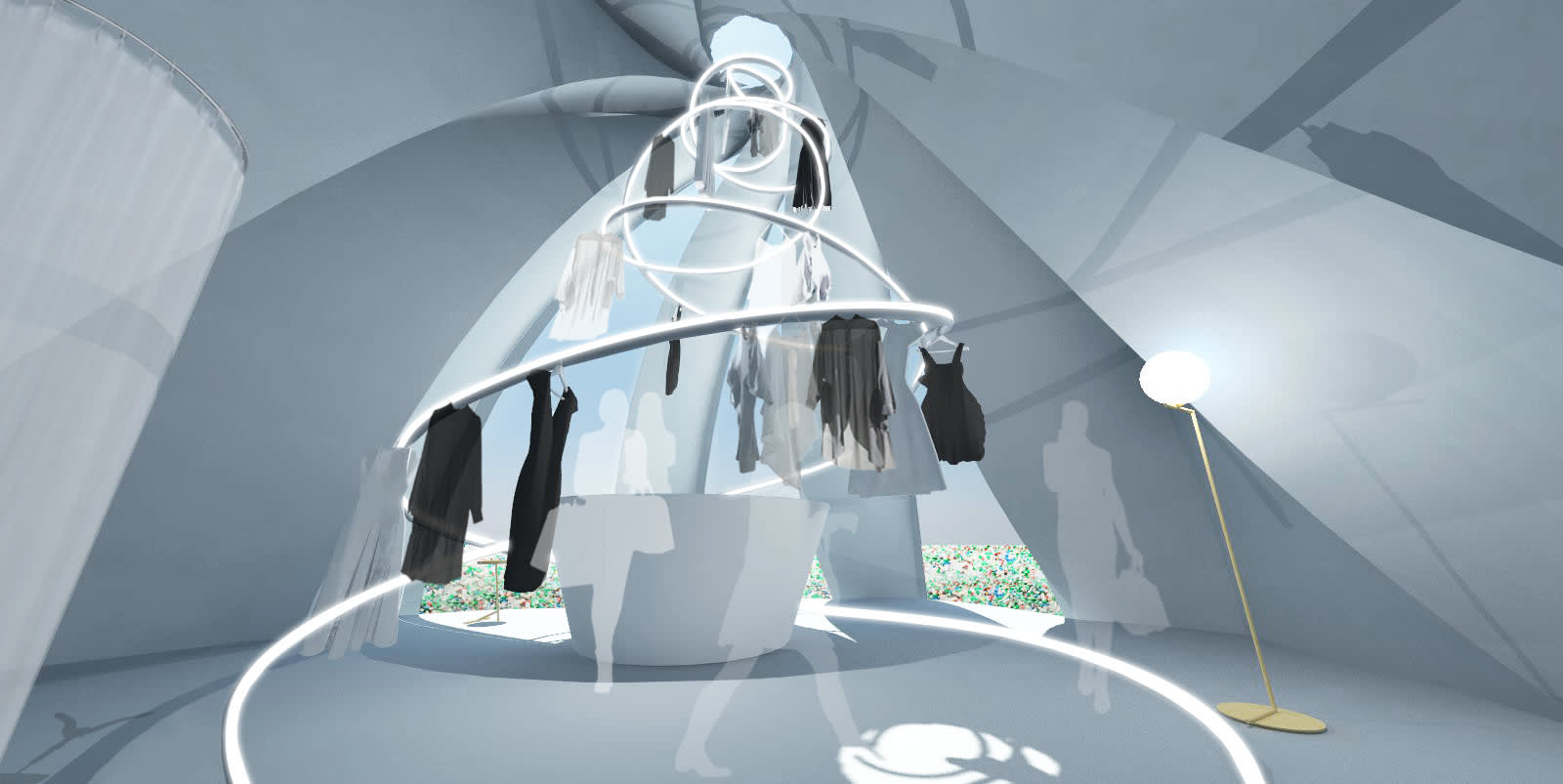 -What point did you consider most for interior

[speech position="左" name="Fumi-chan" content="It is a simple form with few components of the skin of the whole construction, but at the same time it was a very distinctive form, so I wondered how to fit the interior space.
It is possible to make it with the same design code as the outer wall, but in order to emphasize the origami-like appearance, I made the interior a soft design with curves.
It is also a light, a bar for hanging clothes, and it's like an object. I was looking for a quick, intuitive, and exciting form.

Actually, it is not in the output, but I also design a hanger for putting on clothes. A small magnet is attached to the top of the triangular frame, and it is a mechanism that sticks to the hanger pipe by magnetic force.
Although there are not in the output, we designed detailed points like toilet partitions, curtains in the fitting room, and so on."]
[speech position="左" name="Ryo-chan" content="I designed with the thought that it would be nice if the clothes hangers would be illuminated and lit. I thought about the equipment from the perspective of <it would be challenging and interesting!>. And enjoyed the unusual design process."]

Equipment that brings a sense of reality to the world 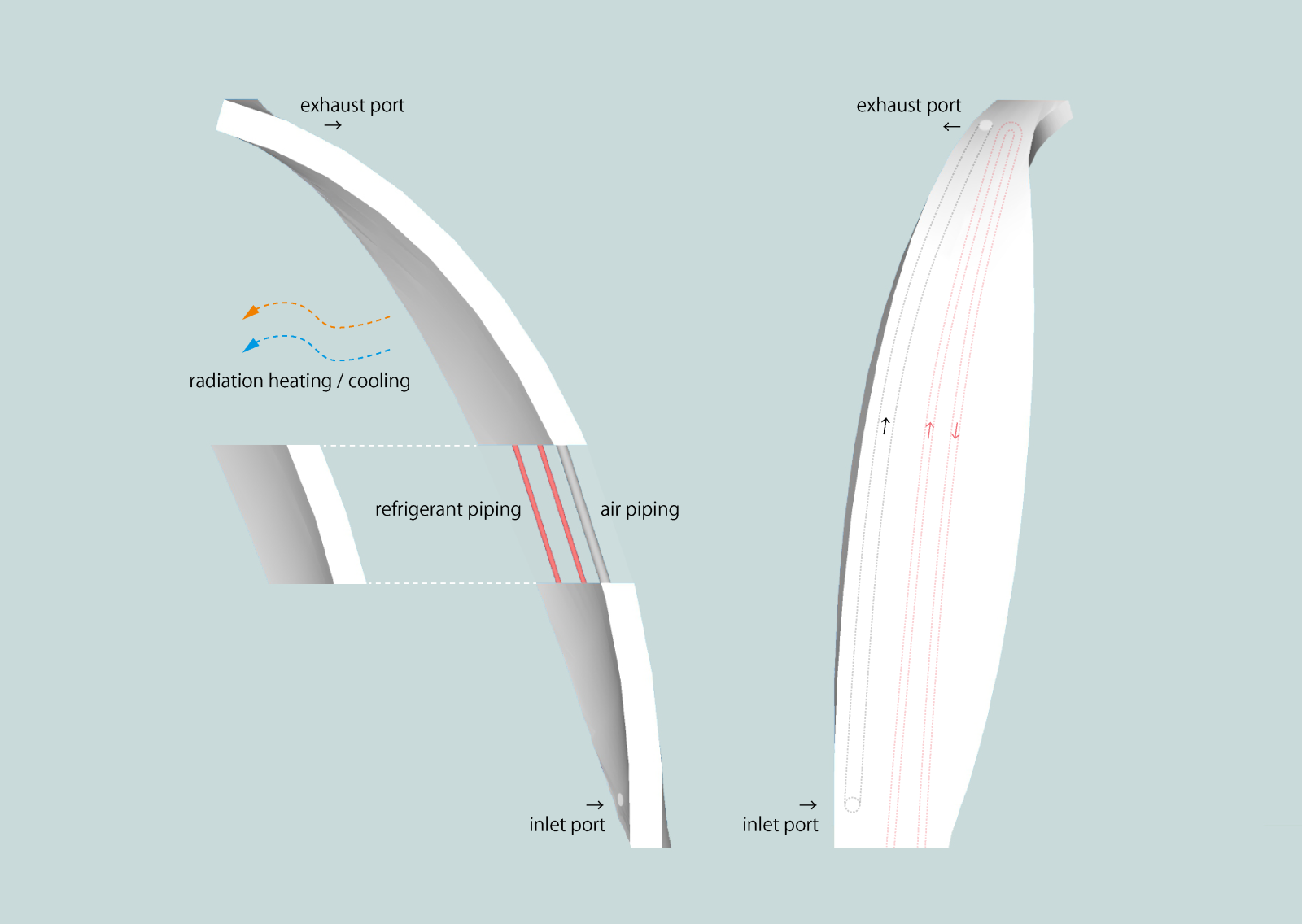 [speech position="左" name="Ryo-chan" content="With regard to air conditioning, we combined imaginative elements while thinking about the feasibility based on real radiation equipment.
We decided to create a fusion of architecture and equipment by dropping the feeling of excitement into technology as <What will happen if pipes and ducts are integrated into the wall made with a 3D printer?>"]

[speech position="左" name="Ryo-chan" content="I thought, <How can I make water?> Although there are some unrealistic parts such as specs, the system for filtering seawater to make water exists in reality, so it led to the creation of more feasible ideas!"]

[speech position="左" name="Ryo-chan" content="As with the facilities around the water, there is a solar power system in reality, so I thought about a mechanism to make electricity from that hint! So I also put the thought that In the process of filtering the seawater, if you can make electricity auxiliary."]

NoMaDoS continues to build a new world. If you look into it, may your world change?

Look at the New World Map